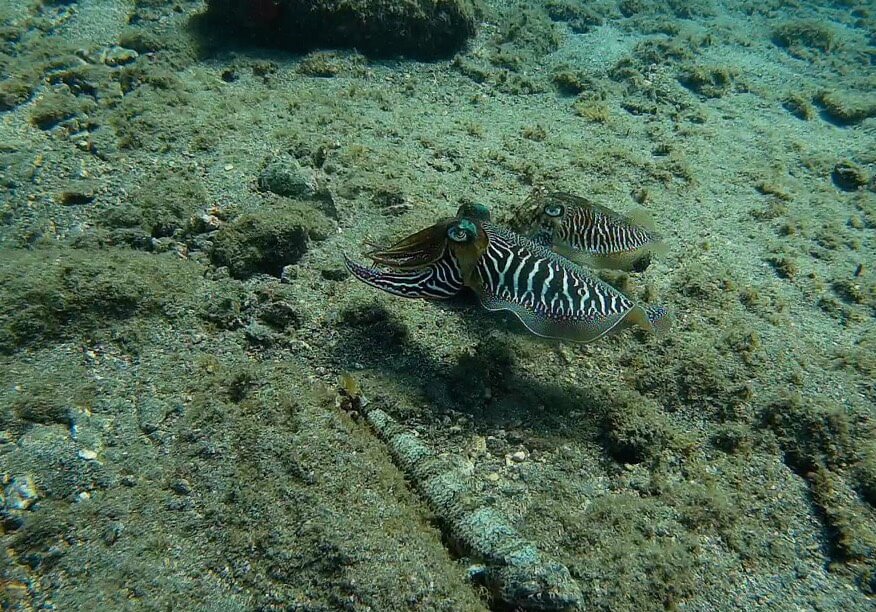 The Cuttlefish – The King Of Camouflage.

Cuttlefish belong to the group of mollusks called the cephalopods. While diving in Gran Canaria we see all species of Cephalopods. The cephalopods are a highly intelligent group of ocean creatures that contains the species:

The literal translation of the term Cephalopod is “head-foot” in Greek.  It refers to the way the cephalopod’s head connects to its many arms.

Physical Characteristics of the Cuttlefish

There are approximately 100 species of cuttlefish in the world and they are easily recognizable via their physical characteristics which are similar to that of an octopus. They have eight arms and two longer tentacles located at the front of the body that is used to capture prey.

But unlike octopus they can float, so how do they do this? Cuttlefish have a broad internal shell known as the cuttlebone. This cuttlebone is filled with gas and enables them to stay afloat in water (their equivalent of our BCD!) 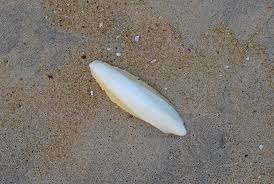 The Size of the cuttlefish:

The size of the cuttlefish can range between 2.5 and 90 cm in length. They have a relatively short life expectancy of between one to two years. The Sepia apama commonly known as the Giant cuttlefish can grow to 50 cm in length and weigh approximately 10.5kg (that’s more than my weight belt!)

Cuttlefish also have excellent camouflage skills, they are often referred to as the Chameleon of the sea.  Like an octopus, they mimic the shape and texture of objects that surround them in order to avoid their predators or any threats. They have the ability to lock hundreds of small structures under their skin in an upright position. By doing this it allows them to mimic a particular texture and carry on their day undetected. Like you can see in the photo below the common Cuttlefish in Gran Canaria is brown, mottled or striped, and are paler underneath. 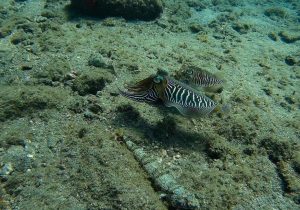 More interesting facts about the physical characteristics of cuttlefish:

What do cuttlefish eat?

Don’t let their size deceive you, cuttlefish are small but mighty. They use their extendable tentacles to catch prey as it moves. When a cuttlefish first spots its prey, it will turn to face them. It will raise it’s two middle arms. They will remain undetected by camouflaging themselves against their environment. Once they are close to their prey they will extend their tentacles to snare their prey.

Cuttlefish have a surprisingly hard sharp beak which allows them to break down and eat hard-shelled animals like crabs. The bite releases a toxin which paralyzes their prey. The neurotoxin in their beak is so lethal that it can even kill the blue-ringed octopus.

Cuttlefish are active predators, but what are some examples of the threats to cuttlefish:

Cuttlefish are a delicacy in many parts of the world. They release Cephalopod ink. Cephalopod ink is released into the water by most species of Cephalopods. The ink contains;

The ink is used as a coloring agent for Italian pasta. And was used as drawing ink and watercolor paint.

The habitat of the cuttlefish

Cuttlefish are exclusively marine species and can be found in most marine habitats from shallow water to depths as deep as 600 meters. They spend the winter time in deep water and prefer the shallow coastal water in springtime.

They prefer the shallow coastal waters to breed in and spend the majority of their time in the sandy area on the seafloor near rocky reefs. When diving in Gran Canaria it is common to see Cuttlefish in the dive site Amadores, El Cabron, Tufia and Risco Verde. The sandy bottom composition makes these dive sites the perfect habitat. They also inhabit the North Sea and the Mediterranean Sea.

If you would like to book a dive in Gran Canaria to try and spot these kings of camouflage then book a dive today!