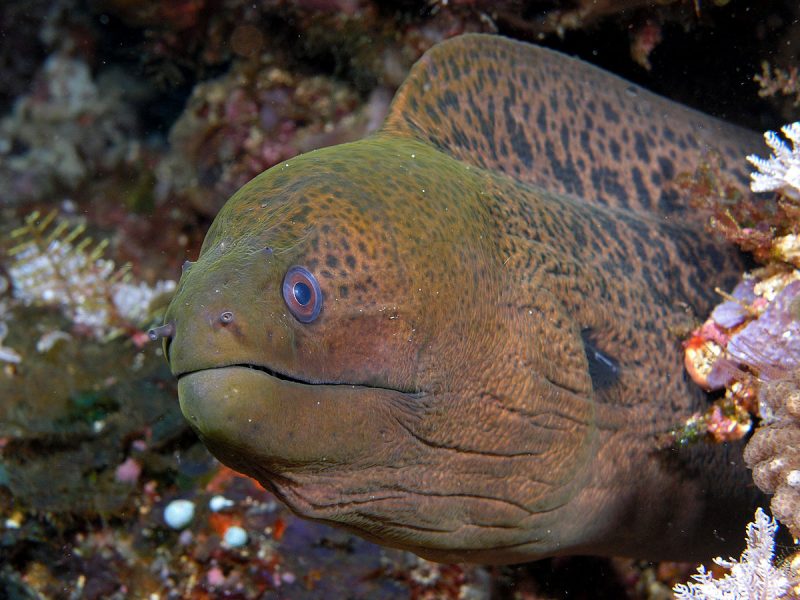 Our onsite marine biologist Divemaster TJ, has been busy writing fact-files about the types of aquatic life we see while diving Gran Canaria.

Each week he has documented a different species that Leagues Ahead Diving see while diving in dive sites such as El Cabron, Tufia and Risco Verde. The aim of these fact-files is to give divers a glimpse into the amazing array of marine life that inhabits the waters of Gran Canaria. Here we have documented all the information you need to know about the amazing Moray eel!

The physical characteristics of a Moray eel

There are roughly 200 known species of Moray eel. Some species can be as small as 25 cm compared to the giant Moray eel that can grow to be as long as 4 meters in length!

Although they may look like a snake there body is not covered in scales but rather a mucus that protects it and allows it to move without resistance into narrow places.

In order to breath, the moray eel needs to constantly open and close its mouth to pump fresh water over its gills. At the bottom of the throat, the Moray eel has a second jaw which draws its prey towards the digestive tract. Now you might be wondering what’s up with these second pair of jaws. Well, remember Ridley Scot’s alien? They have a structure that’s very similar to that of the moray eel called the pharyngeal jaws. When feeding, morays launch these jaws into the prey and transport it into the throat. Showing that even the craziest of science fiction has already been done by nature itself.

Facts about the Moray eel!

Although they may look rather scary at times, they are not a dangerous species. Let’s take a look.

With alien looking heads, sharp teeth and an extra set of jaws, they look like ferocious predators (not to offend any moray eels). However, this is actually far from the truth!

What do Moray eels eat?

The moray eel is a carnivore. They eat:

They hide in rocks and crevices and use the element of surprise as their hunting technique. They wrap their body around their prey until it becomes small enough to be eaten (yep, definitely keep your fingers away!)

The Moray eel is found in warm waters all around the world in tropical and sub-tropical regions. The Moray eel spends most of its time hidden in the caves and rock crevices on the bottom of the sea. We often find Moray eels in one of Gran Canaria’s top dive sites El Cabron. The volcanic rock formations are the perfect place for them to hide.

If you want to find a Moray eel, then book a dive today!