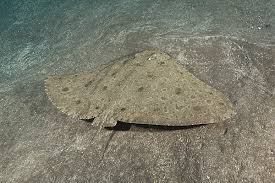 Our onsite marine biologist Divemaster TJ, has been busy writing fact-files about the species of Gran Canaria. Each week he has documented a different species that Leagues Ahead Diving see while under the water! This is to try and educate divers about the underwater world and raise awareness about ocean conservation!

The spiny butterfly ray can be easily distinguished from stingrays by their compressed body, pectoral fins that are wider than their length, and overall diamond shape. The butterfly ray gives birth to live young after an incubation period of 4 to 9 months. Litter sizes usually range from 4 to 6 young. The butterfly ray is an active predator. The ray typically approaches a prey item slowly before rapidly spinning around over it and striking the food with the leading edge of one of their pectoral fins. This serves to stun the prey before capture, as the pectoral fins of butterfly rays contain a high proportion of red muscle and can deliver blows of substantial force. Slow-reproducing and valued for its meat, in recent decades its population has experienced a decline of over 30%, and it has become Critically Endangered in certain parts of its range. It is taken intentionally or incidentally by gillnets, shrimp trawls, longlines, and handlines.